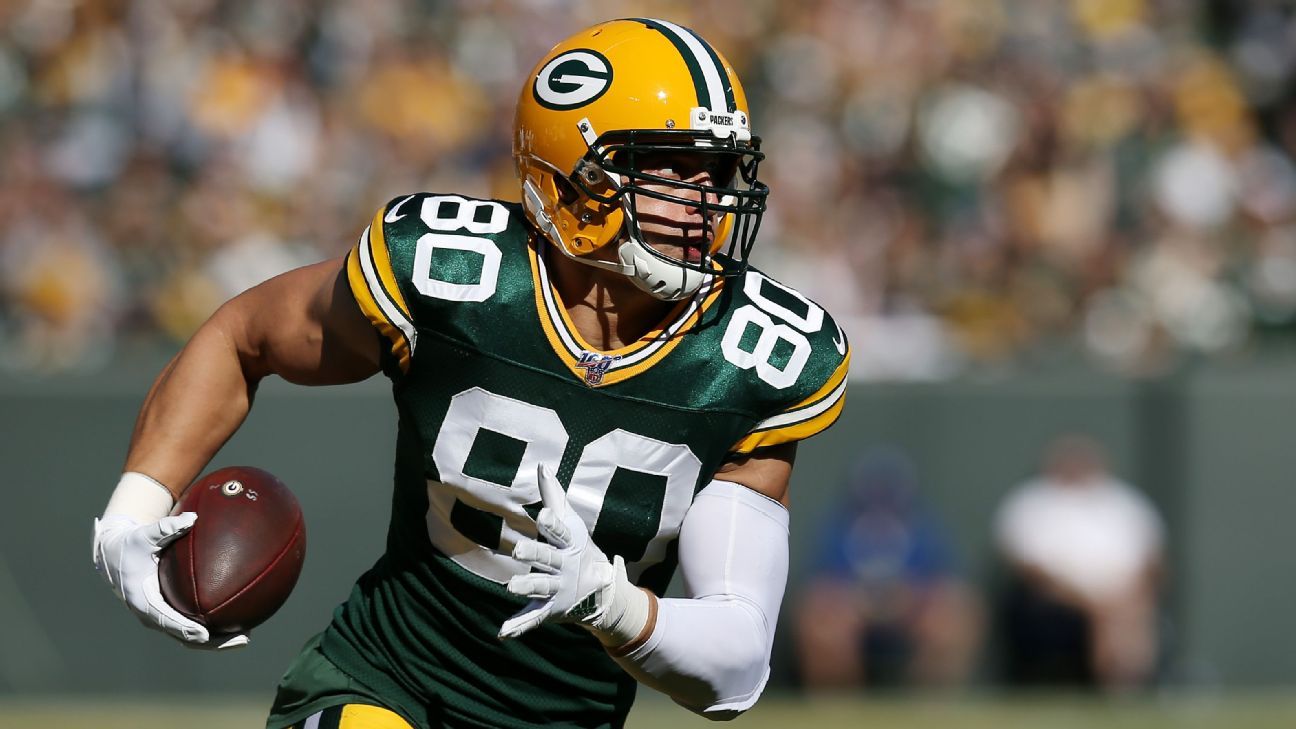 CHICAGO — The Bears‘ decision to sign veteran tight end Jimmy Graham to a two-year contract that included $9 million guaranteed and a no-trade clause on the heels of being released by division rival Green Bay was arguably the most universally panned move in free agency, but Graham insisted on Thursday that he can still perform at an elite level.

“I’m still fast. … I still have the ability to make big plays,” Graham said during a conference call with the Chicago media.

A third-round pick of the New Orleans in the 2010 NFL draft, Graham quickly emerged as the game’s most feared pass-catching tight end, earning a trip to the Pro Bowl in just his second season (2011) with 99 receptions, 1,310 receiving yards and 11 touchdowns. Graham, 33, would eventually be named to five Pro Bowls over stints with New Orleans (2010-14) and Seattle (2015-17) before agreeing a free-agent deal with Green Bay in 2018.

Graham caught 55 passes for 636 yards during his first year with the Packers but those numbers dipped to 38 catches for 447 yards — Graham’s worst production since his rookie year.

“Obviously it was a tough pill to swallow,” Graham said. “It was the first time I lost my job. And I work extremely hard, I’ve sacrificed everything for this game, I’ve given it everything I have and obviously to go through that it was difficult. Now I have the opportunity to win a bunch of games this year and I’m very grateful for that and I’m obviously grateful for the opportunity and the friendships I did make just up north there. But for me, it’s lit a fire.

“I know what player I am and I know what I can do. I think I was able to show a little bit of that in the playoffs with some of the opportunities I was given. And after being 10 years in, I’ve only missed six games. That’s coming off of, at times, all kinds of injuries… at times I’ve kind of been on ice the last two years so my knee right now is the best it’s felt in four or five years. This is the best that I’ve ran, this is the fastest I’ve been in the last four or five years. I’m going to get back to being me, I’m going to get back to making big plays and scoring touchdowns because I think I’m somewhere in the top of scoring touchdowns and I want to continue that, I want to continue climbing that list and get to where I’m supposed to be.”

Chicago had the NFL’s least productive group of tight ends in 2019. The Bears did not have a tight end reach 100 receiving yards — J.P. Holtz led the team with 91 — or 15 receptions as the offense, overall, ranked near the bottom in total offense, points scored, rushing offense and passing offense.

The Bears are also in the midst of a quarterback competition. Chicago traded a fourth-round compensatory draft pick to Jacksonville for veteran quarterback Nick Foles, who is expected to challenge 2017 second overall pick Mitchell Trubisky for the starting job.

The lack of clarity at quarterback didn’t dissuade Graham from choosing the Bears, he said.

“For me, obviously I’ve had the opportunity to watch Trubisky over the past few years,” Graham said. “I mean, the kid’s got a lot of talent, obviously. What he did two years ago and how he dominated was exciting to see. As well as what Nick Foles has done in this league with winning a Super Bowl. I’ve got a lot of confidence in our coaching staff and our quarterback room and I’m excited to work with these guys.

“Obviously that’s kind of one of the big stories this offseason is our quarterback room, but I’m excited to work with both of them and to see where I can help both of them and where we can all get on the same page.”

Graham further cited his strong relationship with general manager Ryan Pace from their time together in New Orleans and the style of offense run by Chicago head coach Matt Nagy as the main motivating factors behind the signing — aside from the Bears’ financial commitment.

“It’s just like Kansas City’s offense and this is the closest I’ve gotten to being in an offense back when I was with New Orleans,” Graham said. “For me moving forward it was about looking at what teams had in place — a great defense because you can’t win deep in the playoffs without a great defense, and then the right system for myself. That was kind of the biggest draw for me was a coach and a system that use a tight end the way I know how to be used.

Behind the numbers of the biggest free-agent signings: Who actually won